Tank games for the Atari 2600 are based on Battlezone, a 1980 arcade game developed by Ed Rotberg for Atari.  Battlezone uses vector graphics and a monochrome display with green and red overlays.  It is driven by a 6502 CPU, a POKEY chip for sound, and came with a 19” CRT.  In Battlezone, the player controls a tank via an innovative periscope, first person view.  The object of the game is to shoot as many enemy tanks, super tanks, UFO’s, and missiles while avoiding getting your own tank shot.  Each of these enemies are worth different point values:

A radar screen and status board tell you when an enemy is in range and in which direction you need to turn your tank to engage or avoid attack.  The status board also shows your score and the number of tanks (lives) remaining.  When your tank is ‘killed’, a simulation of your periscope screen cracking is displayed.

Battlezone was ported to several computer systems of the day and an Atari 2600 version, using raster graphics, was released in 1983.  An Atari 5200 version that uses a combination of vector and raster graphics was in development, but never released.  A copy of a playable prototype is available and seems to be about 90% complete.  Activision also developed their own tank game for the Atari 2600 called Robot Tank.

Released by Atari in 1983, the Atari 2600 port of Battlezone uses raster graphics versus the vector graphics of the arcade.  Instead of a periscope view, the game features a pseudo 3D view of the front of the players tank.  The game includes enemies from the arcade; tanks, super tanks, and UFO’s (saucers), but substitutes the missiles for fighters.  The 2600 version plays like the arcade version and the graphics are nicely done; even the radar and status displays are included.  The one thing missing, which does detract from the game, however, is the battlefield obstacles.  Use of the obstacles by both the player’s and enemy tanks is an important part of the strategy of the game.  Extra lives are rewarded at 50K and 100K points.

Battlezone for the Atari 2600

Designed by Alan Miller, Robot Tank was also released in 1983.  Robot Tank is similar to Battlezone but adds several new twists.  First, no points are awarded; instead, the number of enemy tank kills are tracked.  Extra lives are awarded after an entire enemy squadron of tanks are destroyed.  In Robot Tank, damage to the player’s tank is possible which can cause the screen view to black out, the radar can be lost, cannons to be damaged and fire erratically, and, finally, tank treads can be damaged, making it difficult to maneuver.

Additionally, a full day period is modeled, causing visibility to be limited at dusk and at night.  Alan also modeled fog, rain, & snow which also limits visibility and forces the player to rely on the radar screen.  If radar is lost at night or in the fog, you will be driving blind!

One weakness of Robot Tank is that, if the player turns the his/her tank so that an incoming round is no longer in view, it will miss the player’s tank.  This is, of course not realistic and is, honestly, a flaw in the game.

Both Battlezone and Robot tank are great games for the Atari 2600.  The graphics in both are outstanding and they are both fun to play.  One note of caution for Atari 7800 owners is that Robot Tank is one of a handful of games that does not work on most 7800’s.  I was able to pick up boxed copies of Battlezone and Robot Tank for around ten dollars each.  At that price, why not get both of these great games? 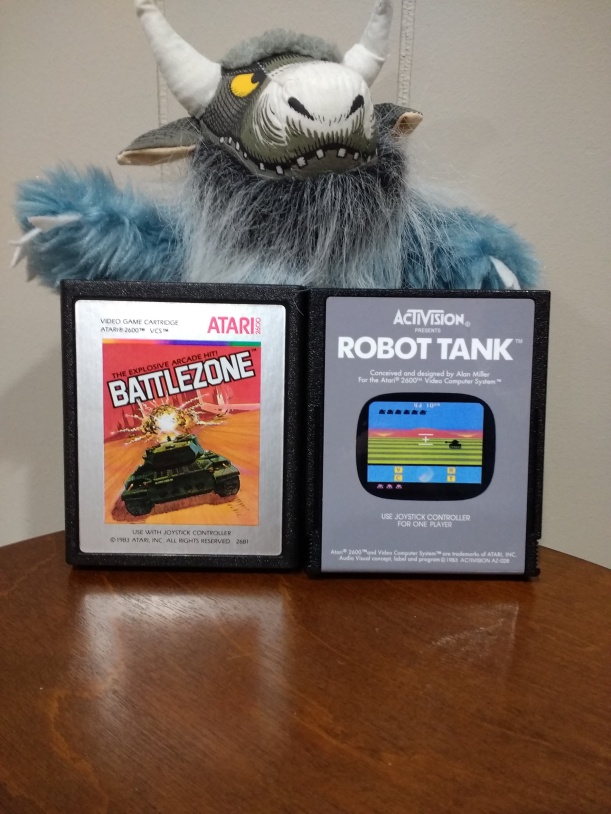